Traumatic brain injury (TBI) is a major cause of disability and death world-wide. According to the CDC, 138 people are affected by TBI every day and these injuries contribute to approximately 30% of all injury deaths in the U.S. In 2010, about 2.5 million TBI related hospitalizations were recorded in the U.S. alone. Hyperbaric Oxygen therapy (HBOT) in conjunction with intensive rehabilitation has been demonstrated to enhance the recovery from TBI and augment brain activity by reducing hypoxia and neuroinflammation, while increasing circulation in the brain.

Clinical studies have demonstrated the benefits of HBOT for TBI with the following:

In 2014, a controlled longitudinal study was published and assessed the effects of intensive rehabilitation combined with HBOT on gross and fine motor function in 150 children with cerebral palsy. This eight-month study involved every child receiving standard rehabilitation, with three groups also including HBOT into their regimen. The control group consisted of children who did not undergo hyperbaric treatments and participated in standard rehabilitation only. All HBOT groups received 40 one hour sessions, six days a week. The first HBOT group was treated at 1.3 atmospheres absolute (ATA) with compressed air. The second HBOT group was treated at 1.5 ATA with 100 percent oxygen delivered through a hood system and the third HBOT group was treated at 1.75 ATA, also with 100 percent oxygen delivered through a hood system. After the eight-month follow up, all four groups improved. However, the HBOT groups’ gross and fine motor function variations were on average three times higher than the control. The study concluded that there was no significant statistical difference between the improvements observed within the three HBOT groups. 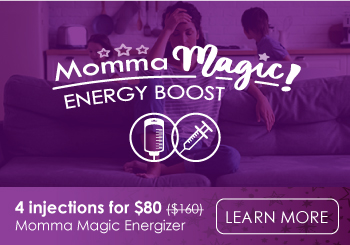 Looking for something to make that momma feel magi

'May' we interest you in an IV infusion or IM inje

Our clinic will be closed today to allow our staff

March onto our #HydrationStation and enjoy an IV I

Time for a little (healthy) #SpringCleaning with o

Looking for a convenient way to #LoveYourHealth th