Approximately 1 billion people, of all ages, are currently affected by neurological disorders, with an estimated 6.8 million deaths that occur every year world-wide. This staggering statistical evidence illustrates the substantial impact of neurological disorders throughout the world. New evidence presents how hyperbaric oxygen therapy (HBOT) is helping individuals regain neurological activity and functionality. For neurodevelopmental and neurodegenerative disorders, in addition to neurological injuries, HBOT provides the brain with increased levels of oxygen to help recover/repair brain tissue, proliferate the creation of new brain cells and improve cognitive functioning.

Clinical studies have demonstrated the benefits of HBOT for neurological conditions with the following:

Increase Regeneration of the Nervous System with HBOT

A prospective, randomized, crossover, controlled trial was published in 2013 testing the effectiveness of HBOT for improving brain function and quality of life for mild-traumatic brain injured patients suffering chronic neurocognitive impairments. A total of 56 patients, 1-5 years after injury, with prolonged post-concussion syndrome were evaluated. Patients in the treated group were assessed prior to HBOT and after 40 HBOT sessions. Whereas patients in the crossover group were evaluated three times: prior to HBOT, after a 2-month control period of no HBOT and after 2-months of 40 HBOT sessions. Significant improvements were confirmed in cognitive function and quality of life in both groups after HBOT, however, no significant improvement was observed following the control period. HBOT was shown to induce significant brain function improvements, the creation of new brain connections and increased brain activity. 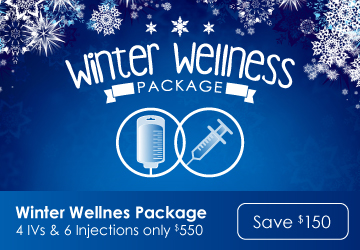 Wishing you a Happy & Healthy Holiday Season and b

Christmas is less than ONE WEEK away! Don't forge

Our Winter Wellness packages are on sale this mont

Make sure to sign up for a FREE B12 injection this

Make sure to sign up for a FREE B12 injection this

A nice article today in the TH about our @viveivth

Looking for a Free-Bie? Sign up for a FREE B12 inj